Soy is a major source of isoflavones, which are plant-estrogens. Plant-estrogens have similarities with the female hormone estrogen, and are the subject of much research to determine whether they have a positive or negative effect on human female health through their interaction with the estrogen hormone receptor.

Recent research shows that soy isoflavones can also act independently of the estrogen receptor via a novel control mechanism. Here we summarize the results of two research projects that determined the physiological effects mediated by micro RNA, the newly identified control mechanism.

It is well-known that soy isoflavones exert female hormone-like effects via the estrogen receptor (ER). Recently, the effect of physiological regulation by isoflavones via a new control mechanism without ER has been investigated. Micro RNAs (miRNA) are small single-stranded non-coding RNAs that play a role in regulating gene expression. They work by binding to mRNA and preventing the translation of the RNA to a protein.

In 2017, Tachibana et al. Investigated the effects of the isoflavone daidzein and its metabolite equol on microRNA expression in the human cervical cancer cell line HeLa using a microRNA analysis chip. The results showed that treatment with daidzein and equol increased the expression level of the miRNA miR-320a (Fig. 1, 2017). 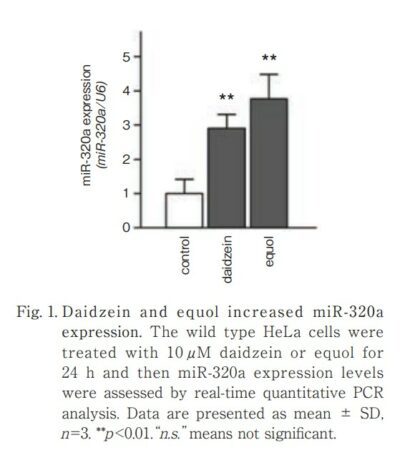 It has been reported that the mRNA_3′ end of the untranslated region of the CTNNB1 gene which encodes β-catenin has a sequence complementary to miR-320a. Thus, the CTNNB1 gene could be be the target gene for miR-320a.

β-catenin is a proto-oncogenic protein that plays an important role in the Wnt pathway. The Wnt/ β-catenin pathway regulates key cellular functions such as proliferation, differentiation apotosis and stem cell renewal. Therefore β-catenin is also involved in the development and progression of cancer through its control of cell proliferation and apoptosis. 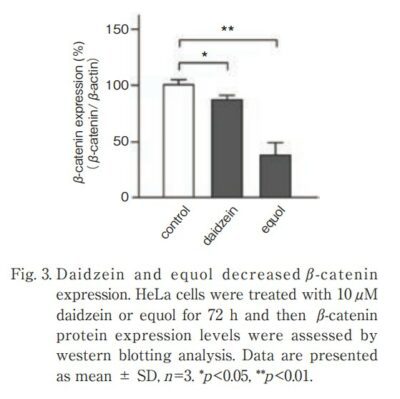 In another study reported in 2018, Tachibana et al. studied the involvement of miRNA-mediated gene expression in the inhibitory effect of isoflavone on bone destruction. Excessive inflammatory cytokines have been reported to promote osteoclast activation and cartilage degradation. Persistent inflammation is considered to be a trigger for osteoporosis associated with rheumatoid arthritis. Using macrophages involved in inflammation as models for inflammatory cytokine-producing cells, they investigated the effect of equol on regulating the expression of IL-6R and searched for microRNA involved in that effect. Using the mouse macrophage-like cell line RAW264.7, they noted that treatment with equol reduced the levels of IL-6R gene and protein expression (Fig. 2, 2018). 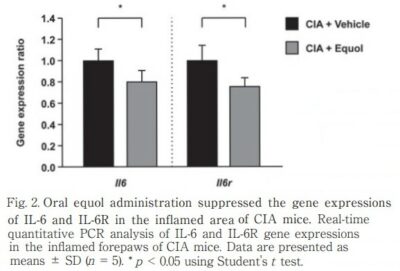 When synthetic miR-320 was introduced into RAW264.7 cells, the level of protein expressionfrom IL-6R was significantly reduced. Therefore, it was suggested that miR-320 targets IL-6R (Fig. 5, 2018). 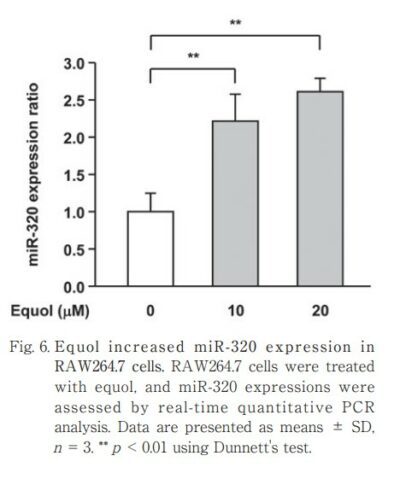 If you have questions about this research, please send your enquiry using the contact form to the Fuji foundation for Protein Research and we will follow up directly with you.

I have a question

The original Japanese language reports can be found at the downloads below.